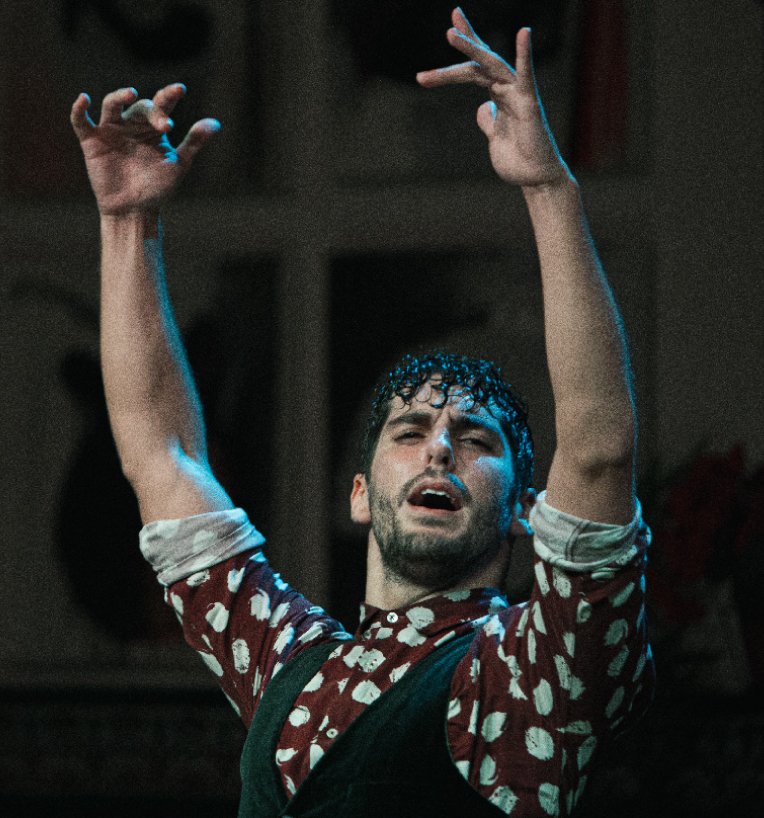 Born in San Fernando (Cádiz). From a very young age he displayed leanings towards Flamenco dancing, claiming first-prize at only 6 years old in the famed Veo Veo television competition hosted by Teresa Rabal.

He began his studies under the tutelage of Angelita Gómez and Patricia Ibáñez in Jerez, he later complemented this work with courses with the legendary Juan Ogalla, La Moneta or Farruquito…

At the age of 17, he received a grant from the Cristina Heeren Foundation in Seville, taking on the role of prefect during the second year of his stay at the institution. During this period he perfected his art under the orders of Javier Barón, Úrsula López, Rafael Campallo and Andrés Marín.

He has been given numerous awards throughout his career, getting first place in the following contests; the XVIII Estepona Competition, the IX City of Huelva Flamenco Dance Competition, the XIII Flamenco Newcomers Competition, and the XXIV Ubrique National Flamenco Arts Contest, and the revelation award at the Jerez Flamenco Festival in 2014.

In 2010 he launched his show “En Libertad” at the Las Cortes Theatre in San Fernando, which was received to great public acclaim and highly regarded by both the general public and specialist press. In september 2016, in the Flamenco Bienal, he debuted the show “Inmanencia” with Javier Barón and Rafael Campallo in the Lope de Vega Theatre.

As well as performing in theatres and festivals, he has also displayed his talent further afield in countries such as Angola, The United States, Sweden, Belgium, Italy, Ireland and the United Kingdom. In recent years he has been part of the cast of the Andalusian flamenco ballet.

His last work called “Once” debuted in “Los Jueves Flamencos de Cajasol” in 2019, where he shared the stage  with the dancer Milagros Mengíbar, a model of the sevillian school.

Access our booking platform and purchase tickets for our show.

Designed with care by INNN